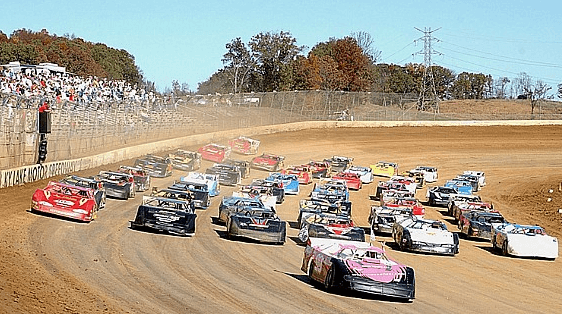 CALVERT CITY, KY. — About 75 attendants gathered under a tent at the Kentucky Lake Motor Speedway on Thursday to witness the auction of Marshall County’s landmark race track. With 11 registered bidders from three states, J. P. King Auction Company sold the race track and an adjoining 317-acre property for $990,000 to Ronald (Ronnie) Jones of Hopkinsville, Kentucky.

The auction of the Kentucky Lake Motor Speedway drew local attention immediately from a community interested to learn what might happen to the now-closed track. J. P. King’s marketing campaign drew national attention to the track as well, with interest from 10 states and 5,159 Web hits.

At the close of the auction, Shayn McMartin, who owns the track with his wife, Sherri Heckenast, said he was pleased with the auction, though selling the track is an emotional experience.

“It gave me goosebumps when I found out it was going to remain a racetrack,” Mr. McMartin said. “We’ve been involved in motor sports for a long time and have friends that are involved in it as well, and we know how important it is to this community. We’re looking forward to kids and families still being able to come here and grow up with the experience the Kentucky Lake Motor Speedway offers.”

“We’re going to put a lot of effort into this,” Mr. Jones said, after signing the contract. “We honestly didn’t think we’d be in the position to buy the track, but we’re excited, and we’re going to work hard to make it a great track again.”

Representatives from the racing industry attended the event to find out what the track’s future might hold, while other interested in other commercial opportunities also attended to bid on the vacant land next to the Speedway. Mr. Jones outbid a developer in the final minutes of the auction. Craig King, J. P. King’s president and CEO said both parties’ interest in the property was a good sign for Marshall County.

“Having bidders at our auction today that were so strongly interested in the commercial potential of the land as well as the Speedway itself bodes well for the area. Seasoned developers are confident in the area’s commercial promise, while racing enthusiasts are interested in further expanding Western Kentucky’s racing reputation,” Mr. King said. “Ultimately, I think the people in the region and in the industry are thrilled to see that the Kentucky Lake Motor Speedway will remain a racetrack.”